Talented writers at Kingsbury High School have had their stories published in a national anthology. A Twist in the Tale – Southern Stories, edited by Jenni Bannister and published by Young Writers, features the work of 14 Year 9 students.

The book is the result of a competition run by Young Writers to encourage young people to engage in creative writing. The brief was to write a story with an unexpected twist in up to 100 words.

The anthology will be available for staff and students to borrow from the lower school library and will also be held at The British Library.

Tayari Gachegua said “We had to try and write a story within a hundred words and the story had to have a twist at the end. At first, one hundred words seems like quite a lot, but as you start writing, you realise that you want to include more detail so it was quite a challenge. My story is called The Prisoner. It’s about a grandfather who is telling his grandchildren about his time in prison. When I saw the book for the first time, my heart started pumping; I was just a bit nervous. The fact that the book will be in our school library is even more nerve-wracking than it being in The British Library because with The British Library, it will be members of the public and people that we don’t know, whereas in the school library it’s your peers that are going to be reading it, so they are going to be direct; they’re going to tell you if it’s terrible or if it’s a good story, so I’m nervous about what they’re going to say”

Adam Badawy said “I’ve been to the British Library a few times and I’ve seen how big it is, so I was really surprised when I heard the book was going to be held there. It’s quite a big honour to see something that I have written in there.”

The KHS Literary Society has celebrated a year of stimulating discussion and creative output by compiling an anthology of new writing. The anthology largely contains short stories and poems written by Sixth Form members of the society together with the winning entries of a creative writing competition held in the lower school. It also includes one contribution from a teacher and records some of the sessions held by the society. Edited by Sadia Hameed and Harshadha Subramanian, the anthology is intended as “a collage of the literary adventures and achievements at KHS this year”. It is hoped that this initiative inspires the next generation to take the baton and develop further literary and creative writing opportunities within the school.

Click on the following image to read the KHS Literary Society Anthology: 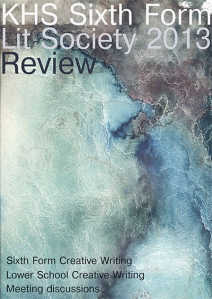