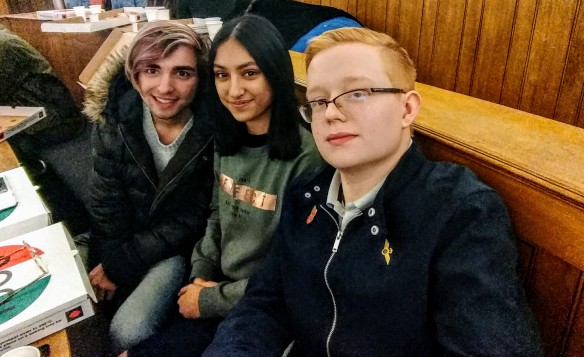 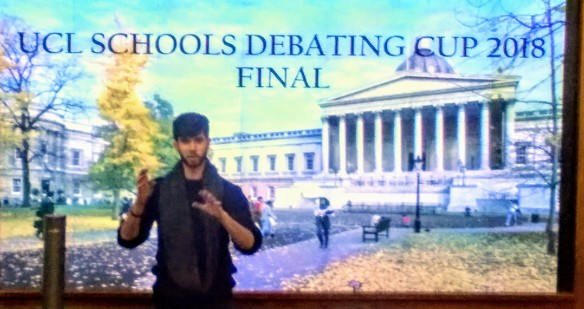 A small group of KHS students travelled to the Institute of Education to compete in the UCL Schools’ Debating Cup, a fiercely contested event with teams from some of the best debating schools in the country (such as Dulwich College, Eton and St Paul’s Girls). Kingsbury High School was represented in the competition by Aaron Stevens and Arran Jabbari, two Debating Society regulars but external competition “novices”, with support on the sidelines from Nikita Shikotra and Nauman Zahid; and Kingsbury’s Head Boy, Haider Nazerali, competed for the Debate Mate organisation with a partner from another school. They all enjoyed the competition and the motions were challenging but also very interesting.

It became clear, as the competition progressed, that Haider’s team was heading for the finals and we all stayed to watch his brilliant performance in the semi-final (on requiring games manufacturers to promote female protagonists), followed by his characteristically strong contribution to an exceptionally hard-fought final on a motion proposing the selling of citizenships. In the end Haider shared joint first prize with his Debate Mate partner as Best Speaker on the Day (highest scoring across all debates) and was a Runner-Up in the Final, with the Debate Mate team narrowly losing to  Dulwich College.

Haider is next representing Kingsbury High School in the National Finals of the Cambridge Union Schools Debating Competition, in which he will be partnered by Head Girl, Sara Dehvari. The school will also be represented in these finals by Salem Ali and Akira Allman, who have performed superbly in Wednesday lunch-time debates over the course of the year.